This is the Ryan Shazier Super Bowl: Put Your Hand on Your Heart

Posted on February 4, 2018 by brewonsouthu

I’m troubled about the Super Bowl tomorrow. Yes, the Pats remind me of the old Larry Bird Boston Celtics era, when you left the game, or the broadcast, wanting to thank the sports gods that you have been allowed to watch something so elegantly executed.

But any thoughts about the potential beauty and perfection of this Super Bowl game and its players have vanished over the week, because I keep thinking about Ryan Shazier, the electric Steelers (and formerly OSU) linebacker, who went down this season with a savage injury.

As I try to discern what has happened since, and exactly how Shazier is faring, I think of Joe Lockhart, the NFL’s PR man, and what I am fairly certain he has been doing.

Lockhart is “handling” the terror which has risen in the hearts of every NFL owner. And Lockhart has had, I will fairly presume, strict orders: manage this goddam PR problem which is Ryan Shazier.

The NFL Will Not Let Us Know

So what we have seen is the product of Lockhart’s mandated work:  we do not know. Lockhart won’t let us know. Those who scratch, like I have, can find that Shazier has lost the use of his legs. But Lockhart has managed those facts, so the average fan does not know, and Lockhart has propped Shazier up in a windowed press box, during a Steelers playoff loss, to let the Great American Watchers see his determined, smiling face. But we do not know the explicit awful truth: Shazier has, most likely, lost his legs. 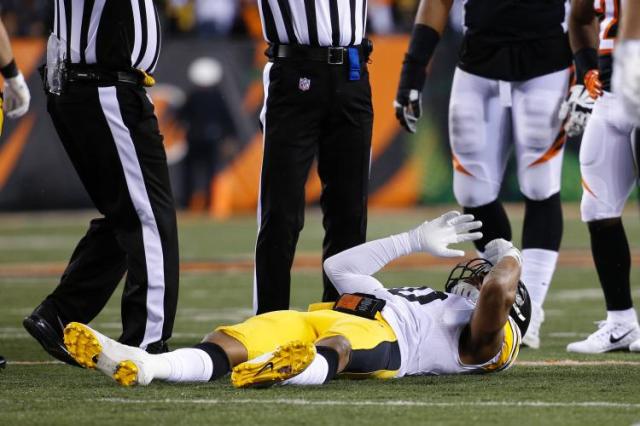 Lockhart has done his job well, so we concentrate on other things. TB12. Tom and Time. Nick Foles. The stars. No one concentrates on Ryan Shazier.

This is not, whatever PR spin-fellow Lockhart wants us to think, Super Bowl LII. This is the Ryan Shazier Super Bowl. Do you enjoy football? If you do, you are consuming a product produced by an industry which has, as most industries do, offal. Effluent. The waste which is the by-product of production.

That’s what Ryan Shazier’s legs are. The effluent waste of the sports Promo-Tainment industry.

When you stand in Minneapolis, or in your living room, as the Super Bowl starts, don’t let the blood rise in your jowls, annoyed that others view the salute, or silence, or bended knee, as being directed either in opposition to, or in favor of, whatever your political leaning might be.

Forget about the politics. Forget about the symbolism, as if what happens on bended knee can possibly represent adequately your political bias. Because that’s what every sports fan wants: leave the politics out of it, we just want to enjoy the game.

But after all of us — R or D, conservative or liberal — drain every drop of politics out of our SuperBowl, there still remains, staring us all in the face — were it not for NFL PR-spin guy Lockhart —  a much more pressing issue,  which demands that we peer directly in on the tragedy which is the by-product of our buffalo-wings, our Budweisers, and our family-and-military-supporting pleasure.

As the gala unfolds. Stop. Be silent. Bend your knee, if you want. Don’t bend it. Hold your hand over your heart. Don’t hold it over your heart. Sing, for once, though, your national anthem. Together.

And think, before you get righteous about religious or other principle, about those who have sacrificed to bring you your carnival of pleasure. Look over toward those windowed seats, where the owners and Joe Lockhart sit, high above the playing field. And maybe, also, Ryan Shazier.

And say a silent prayer, all of you, in concert, without political or other division, for a man who has worked hard, and sacrificed his spine and his ambulation, to your ritual February celebration of family and country. And in that prayer, think and press for some intervention for our super-hero Ryan Shazier, at this, the Ryan Shazier Super Bowl.

And know that Joe Lockhart has sent out a memo, in advance of this Ryan Shazier SuperBowl, to all involved: whatever you do, do not mention Ryan Shaziers lost legs.

But this is Ryan Shazier’s SuperBowl.