Miller told, according to tweets by WLNS reporter Alexandra Illitch, of being bent over in the supply room, with a doctor putting his ungloved hands in her private area.

“Are you listening MSU?

This was, ostensibly medical care. In a supply room.

“You need to confess the facts”

“You need to confess the facts,” Miller concluded, as if an angel sent to get Nasser and MSU to recognize their sins. “You can help others, and if you do, if you help my sisters, it

She might have been prompted by the bizarre statements made by MSU coaches over the weekend. Basketball coach Tom Izzo, and football coach Mark D’Antonio (both of whom I have previously admired, for their plain-spokenness, and lack of airs), solemnly declared that they had “the utmost faith” in MSU President Simon.

Izzo wandered much further, suggesting that he wanted to make sure “they convicted the right person.”  This is eye-in-the-middle of the forehead stuff, making Izzo appear as though he’s convinced that Spaceship Ruthie is going to appear in 2019 on Iron Mountain, Michigan. It would be humorous, if it were not a window onto MSU’s appalling failure to provide any training, on Cleary Act or sexual abusetopics , to any of its coaches — who are all still entirely lost-at-sea, apparently unaware of their duties, and lacking in the kinds of training which so many athletic departments have provided to coaches on these topics. This absence of training, and odd cluelessness, is the work, or non-work, of athletic director Mark Hollis.

But women’s basketball coach Amy Merchant outdid Izzo, declaring in a video interview on January 19 that no one can prevent these “Act-Alone Monsters” from inflicting their damage.

If there were two lessons from the Sandusky scandal which erupted at Penn State in 2011, the primary one was that what appear to be “Act-Alone Monsters” are often allowed to inflict damage upon young people because of a lack of institutional awareness and control, and the tendency of athletic bureaucracies, so as not to jeopardize wins and eligibility for the Learfield Cup, to bury transgressions. (The second lesson from Sandusky was: if athletic personnel will cover-up pedophilia, then they will cover up anything, including the much more prosaic NCAA rules of behavior.) Merchant, apparently, never got any training at all.

“Tell us who knew what and when,” Miller pleaded. “Tell us about the signs that MSU, Twistars and USAG should have seen, but didn’t.”

Instead, MSU has told us, over the last four or five days, much more new information, including: 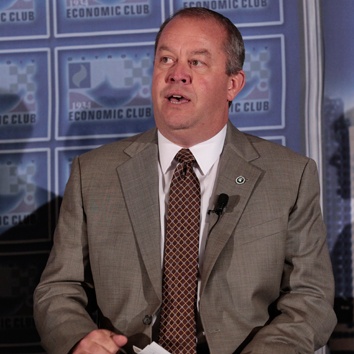 AD Mark Hollis Had the PSU CookBook on His Desk, All Along

None of this is difficult. MSU AD Hollis had the entire road map laid out for him by Senator Mitchell, between 2012 and 2016.  It was if Hollis had the Joy of Cooking cookbook, with all the easy steps for compliance and prevention of harm, handed to him by PSU and Senator Mitchell back in 2012. (The Big10 and, therefore, MSU, were parties to that agreement.): Appoint a Monitor like Mitchell. Implement the ‘Athletics Integrity Agreement’ which PSU and Mitchell laid out, to insure that a big-time athletics operation does not countenance or fail to discern sexual abuse of minors. Make sure that no one meets with a minor alone, and make sure that both who are there have thorough training. Have the Monitor report quarterly to the Board. Have the Monitor independently warrant that substantive institutional change has occurred, so that no more molestation will occur.

Oh, and by the way, appoint an independent Team Monitor for every varsity team. Question for Mark Hollis: if you’d done all this in 2012, would that have caused your gymnastics coach Klage, perhaps, to have behaved differently, to prevent molestation?

Oh, and by the way.  While you are dodging liability, MSU, AD Hollis, and Atty. Fitzgerald, you are also failing your duty to address the new issue presented by your Nasser scandal, which was not present at Penn State: should the ‘two persons present at all times” rule, which the AIA insisted apply to all PSU encounters with minors, also be imposed with respect to any MSU (and other university) encounter with females over the age of majority (age 18)?

Simple. But MSU AD has been sound asleep. If MSU AD Mark Hollis had been awake, he easily could have prevented much of the MSU/Nasser molestation which occurred since 2012.

So the scope of this MSU/Nasser scandal is much worse than it first appears.

It’s Not Over. The Risk of Harm is Still There

Why? It is not over. The scandal continues. The risk is now still as raw and real as it was 6 years ago, or 3 years ago, or six months ago. Coach Suzy Merchant, in all her bewilderment, believes that “Act-Alone Monsters” cause all this damage. Tom Izzo dreams that maybe someone other than Nasser committed all this molestation. And, apparently, no coach has gotten training, or has ever even seen or read the ‘Athletics Integrity Agreement’ to which MSU was a party.

If you are a prospective female student-athlete, go elsewhere. If you are a current women’s basketball player, operating under a coach who hasn’t a clue how sexual molestation or harrasment develops: good luck to you, because MSU is busy burying the facts and covering the tracks. MSU student-athletes: confirm everything in a followup email, because these people are not to be trusted. They are busy covering their tracks and circling the wagons.

The MSU board and coaches today represent a real and present risk to the health and welfare of MSU student-athletes.

But all these old Baby Boomers — Simon, Hollis, Izzo, D’Antonia, Merchant — are insisting they know what’s best, and that their million-dollar jobs should never be jeopardized.

“Please,” Emma Miller said, “help my sisters. This would be a redeeming act.”

Are you listening MSU? I can’t hear you.”