“Wilful Blindness” by Joe Paterno and Fred Wilpon: Self-Interest Trumps the Duty to Protect Others 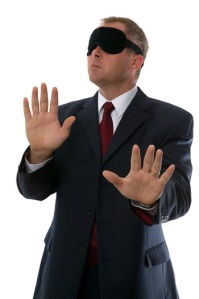 Remember the name: Noreen Harrington. She’s the Accountant who will  singlehandedly, next week, take down the Wilpon empire.  You will soon know her name.  Very well. Starting next Tuesday (March 19) the idiosyncratic Federal Judge Rakoff will preside at trial of the action brought by Trustee Irving Picard, on behalf of all jilted former Bernie Madoff “Ponzi Scheme” victims, to recover millions, maybe billions, lost through Madoff’s many malversations.

Until this week, the Wilpon group’s defense to Trustee Picard’s lawsuit had been, “Oh Yea? — prove it!” But it all changed this week, when the unpredictable Judge Rakoff (who tends to change his mind in mind-litigation stream) decided that Wilpon and his associates will have the burden of proof at trial:  Wilpon will have to show that he and his associates did not commit a wrong.  This was a staggering blow to Wilpon, so much so that he (and his attorneys) are probably, at this point, substantially disoriented.  Perhaps not as disoriented as his two sons, and the several others with whom Fred Wilpon has colluded over the last months to convince that each ought pony up — or at least make some representations that each will pony up — some $20 million apiece to invest in, and collectively shore up, the eroding Wilpon/Mets empire.

Watch to see what happens here next week, and tell me then if the parallels are not eerie. Ms. Harrington, an independent third party, acting on behalf of her bosses, Fred Wilpon and his partner Saul Katz, saw some facts which caused her great alarm: when hired by Wilpon and Katz to analyze the wisdom of placing substantial additional investments with Bernie Madoff’s mysterious operation, Harrington told her bosses: I saw something really weird, if not disgusting. She effectively – if not explicitly – told Wilpon and Katz: do not invest anything else with Bernie Madoff.

Mike McQueary back on the morning of March 2, 2002 also gave his own boss, Joe Paterno, some very bad news. The “very upset” McQueary told Paterno that he had, the previous evening at 9 p.m., interrupted former PSU Coach Jerry Sandusky while he was allegedly raping a ten year old boy in the PSU football showers.  Something weird, and clearly disgusting.

The parallels are not unfair, though the two crimes are so very different. To illustrate that common ground, I’ll go back to a comparison I made in an earlier post: it is as if Joe Paterno and Fred Wilpon were both told by their respective teenage daughters, returning home after a Friday night high school football game, that she and her friends had found, out behind the bleachers, lying amongst the russet leaves on the ground, a severed hand.

But to take the example further, both Wilpon and Paterno would have us believe — as regards their actions after having been informed of discovery of that bizarre, astonishing severed hand — three outrageous lies:

1) that they just plain forgot about that severed hand, after their innocent, earnest and entirely trustworthy daughter had, with contorted, worried, if not demonized face informed them of it;
2) the severed hand was not at all important and
3) there was really no reason to do anything else to responsibly process, track down, or investigate this new, gruesome information.

What you’re witnessing here, at least in the Wilpon/Picard/Madoff trial, is the extraordinary beauty of the American system of law. We have before us now, through a long, twisted set of legal circumstances which have led us now toward this trial next Tuesday, the most precise, well-suited legal questions which might possibly have been applied to Wilpon’s actions all these years he’d “gotten in bed with Madoff” — and, to the odd, disturbing passivity of Joe Paterno over the last decade:

1) Can you prove, Sir, that your actions did not reflect “wilful blindness” to the fact of Madoff’s ongoing fraudulent scheme (or, in Coach Paterno’s case, to the fact of Sandusky’s apparent status as a child rapist?)
2) Why did you not take further steps to inquire?
3) Was it because you desperately wanted, for your own self-interests and not those of others, to remain as blind as you possibly could to patently, horribly harmful behavior — behavior which sent out a clear message of present, looming danger to many others, and behavior which you alone had become privy to?
4) What did you do?
5) Why did you not do anything else?
6) Was it your own self-interest which caused you to do nothing in the face of these horrible events? and (as regards Joe Paterno)
7) Were you not worried about other children being raped?

Wilful Blindness. I’ll defy any of those who rioted when Paterno was relieved of his duties as PSU Head Coach (he was never fired), or those who blithely accept the cushy continued employment and sabbatical by former PSU President Spanier ($25,000 weekly salary), to answer this simple question: did Paterno and Spanier not, for an entire long decade, “wilfully blind” themselves to the alleged child molester on their campus?