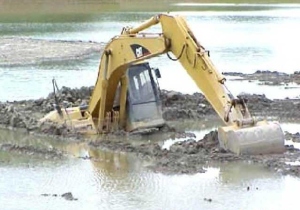 Terrelle Pryor, Posey, and the rest of them sold gold football pant trinkets for Tattoos and cash to a Tat-Guy named Rife.  Not red pants —  but Gold pants.  Which they were awarded for beating Michigan.  So the OSU NCAA case has a whimsical connection to the U of M.

But the OSU case showcases how NCAA Ethics bylaws (By Law 10.1) should be enforced, and it’s worth our while to see what it tells us about the way Michigan’s NCAA problems unfolded over the last several years.  So — while Pee Wee Gee and Clean Gene Smith continue to muck-foot around the swamp and quicksand which they’ve created at OSU — let’s take a quick look back at the Michigan scene a year ago, in light of what we’ve learned at OSU.

Jim Tressel has given us a lesson in how to bury a significant problem – and get in big trouble for it.  But Bill Martin, the record shows, had his own big and very active backhoe which he used for burying NCAA violations.  The main difference, however, between Tressel and Martin is that Tressel lost his job for his burial activities; Martin didn’t suffer any penalty at all for his Big Coverup.

The written record (you can find it thoroughly summarized in my early posts here, in October 2010) shows that Martin got very complete and damning information about Michigan’s too-many-coaches and too-much-practice-time NCAA violations in early January 2009.  [There is, I should note, very strong suggestion that Martin knew all about these potential violations long before, perhaps even as soon as Rich Rod was hired in December 2007.]

FREEZE-FRAME:  Compare: Bill Martin in January 2009 to Jim Tressel in April 2010. They are in precisely the same spot: they’ve both gotten much written data which suggests to any reasonable person that significant NCAA violations have gone on within their respective programs. But they are in slightly different positions: Tressel’s info is that his players – not his own employees – have wandered off and done NCAA-violative things.  In contrast, Martin’s information is that his own employees (Rich Rod, Dir of FB Ops Labadie, and Asst AD Draper) have violated NCAA bylaws.

At this Freeze Frame time, what do these two “leaders” do?  BOTH BURY AND COVERUP.  Both bury for about 9 months — and the only reason each of them gets caught after nine months is that someone else (the feds, in OSU’s case, and the Freep in UM’s case) have to go dig the information up and give it public display.

How did Martin bury at this Freeze-Frame point?:  He basically did nothing. I will surmise that he must have called up Rich Rod, and didn’t like what he heard, so then decided to actively work to bury the problems – but the limited written record leaves me guessing.  What we do know is that he never reported nothin’ to nobody — not Jim Delaney at the Big Ten, not the NCAA, not Pres. Coleman.  Nobody found out anything.  He sends a few emails to underlings. He’s unequivocally “taken over” the problem from Asst AD for Compliance Judy Van Horn by January 2009 – she gave him all the info.  Does he order an “all-hands-on-deck” thorough investigation?  Does he probe at all? Do any heads roll?  Does anyone get called on the carpet?  NOT HARDLY.  He sits on it.

But the record suggests he actually had a plan, and did some affirmative things to arrange to make the Cover-up thorough.  EVERYONE in Martin’s department knows there will be an audit of all practice-time records by UM Auditors on May 7, 2009  You’d think Martin would issue a flurry of orders in January —  5 months previous — to make sure EVERY such record is filed, signed by the required person (Rich Rod), accurate, and complete.  NOT.  In fact, the record shows he toyed with Ann Vollano, a Compliance Officer under Van Horn, by making her think that Brad Labadie (the Rich Rod consigliere who single-handedly tubed the ENTIRE Practice Time Record process for 18 months, by never filing one such record) was going to file those records before the upcoming May 7 Audit.  Vollano pleads with Labadie, one day before May 7, and even on the day of the Audit, to get them filed.  Labadie is conveniently “out of the office.”  No records appear. This is all clearly an execution of Bill Martin’s cover-up, and the suggestion in the record is that Labadie did a huge “no-show” on May 7 because Bill Martin wanted him to.

After all, where does Labadie go 8 days later? — to hobnob with the all the elites at the Chicago Big Ten Conference annual gathering with — GUESS WHO?  –  Bill Martin!  Shouldn’t Martin have been furious with Labadie, after all, for failing again to file those reports? After all, Martin  must have known immediately after the Audit was conducted that no records were produced. What gives?

This continues for the next few months, until the Freep blows Martin’s cover in August (someone on the inside clearly got completely fed up with Martin’s corrupt cover-up and leaked it to the Freep)  he and Rich Rod start scrambling. In those few months, did anyone get fired, sanctioned, re-assigned? Nope.

We know what sanctions resulted for UM.  But recall the UM filing to the NCAA in May 2010:  who did they primarily fault for the Practice-Time and Coach-Number violations, in this publicly-filed, widely-read brief — despite Bill Martin’s obvious unethical failures to report, and obvious leadership in a cover-up effort?   JUDY VAN HORN.   That’s Bill Martin for you: small man, gutless, willing to hang out to dry a woman who had no fault, and  only tried to protect and help her Boss Bill Martin.  And Coleman and Brandon let Martin — literally — quietly slip out the back door in December 2009.  No sanctions, no firing like Tressel got. Nothing. But Coleman and Brandon aren’t dumb.  The last thing they wanted to have to do was to have Bill Martin and his Backhoe at the NCAA Compliance Hearing in Seattle in August 2010. Because Bill Martin’s efforts during this entire 9 months from January to September 2009 violated — just as did  Jim Tressel’s nine months of cover-up — NCAA Ethics By Law 10.1